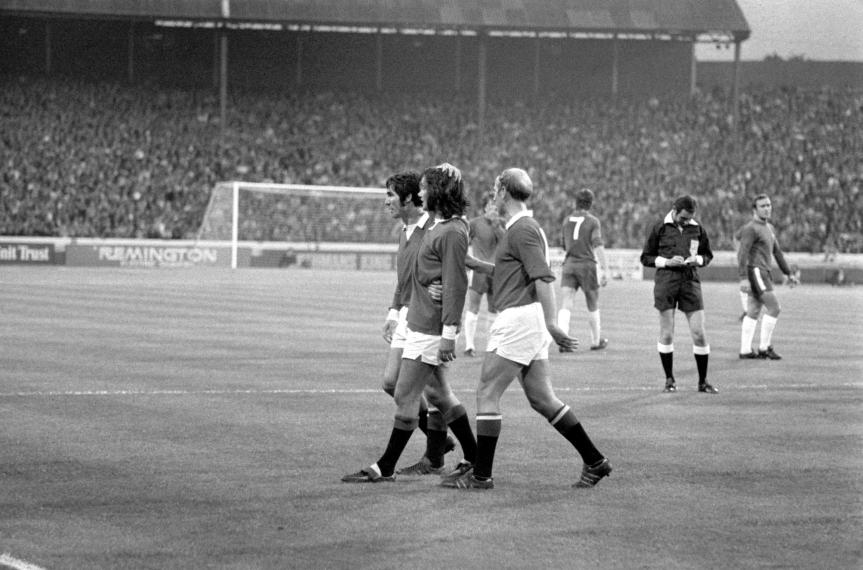 WE ALL wanted to be George Best. In the playground, on the football pitch, in the disco(!), in the boutique. He seemed to have everything that a virile male, circa 1967-72, needed to be a success in life: looks, women and outstanding ability.

But he was a flawed character, and there can be no other assessment as we now look back on his short and problematical life. The film, “Best”, offers nothing new on this tortured individual and anyone watching it leaves the cinema saddened and perhaps a little angry.

It is terrible to see a life end prematurely, a football career shortened by self destruction and other people’s lives wrecked by the behaviour of somebody who should still be with us today. But at the same time, this was a man who had many chances, many friends and many gifts. He wasn’t a pop star, wasn’t a person who could continue delivering greatness for decades because he was a sportsman. His window of opportunity was always going to be brief, if only he truly realised it.

Best said that he never had to work hard for anything and perhaps therein lies part of the problem. Less gifted men have made more of their careers and their more limited ability – Kevin Keegan is one that springs to mind. Maybe, just maybe, if Best had to work hard to become the football genius he so clearly was, he may have avoided some of the pitfalls that plagued him.

Because, when all is said and done, Best had the sort of “animal” talent that is seldom found in football. The likes of Messi and Ronaldo represent the pinnacle of the modern game, but their skills, their outstanding ability is a more refined and tactical skill-set. Best had this rawness that was both sinuous and sensual, twisting and turning, tricking and teasing. There was a poetic and balletic element that made football an art form to be admired and drooled over.

Best was not a “one trick pony”, but he was a footballer. That was his trade and he was, at his peak, bettered by only a handful in the history of the game. In the current era, he would be a brand that would sustain him for decades. Sadly, the Best brand was destroyed as his life became a never-ending tale of alcohol, women, stop-gap employment and newspaper headlines.

When did it really start to go wrong? Best has said that after Manchester United won the European Cup, there was a sense of anti-climax at Old Trafford. He’s not wrong, for the supporters felt that as much as anyone. United’s fall from grace between 1968 and 1974 was down to a number of factors: Sir Matt Busby’s retirement, poor managerial appointments, the decline of the holy trinity of Best – Charlton – Law and the club’s inability to compete in the transfer market.

Best was only 22 when United won the European Cup. That team had an average age of 26, but included three who were over 30 (Brennan, Foulkes and Charlton) and along with Best, younger players like David Sadler (22), Brian Kidd (19) and John Aston (20). Denis Law, who was injured, was 28. With Charlton no longer as influential and Law hampered by fitness, the hub of the United team in the years that followed declined. It was invariably “give it George” and the pressure on him grew. Best shifted from being part of a trio to being the main hope for United and it was impossible for him to carry a diminishing force.

United dropped to mid-table in 1968-69 and Best scored a third of their 57 league goals. The next couple of seasons saw them become less influential and relevant as clubs like Leeds United and Arsenal set the narrative. It was clear that United’s younger players were not made of the same stuff as Busby’s title winners of 1967. Best, to quote somebody in the film, “started to make his own rules” and was constantly rubbing-up against the authorities. There were still flickers of genius, such as in 1970 when he hit six goals against Northampton in the FA Cup, but Best all too frequently looked like a man unhappy with himself and with his club. He made headlines either for going missing, being sent-off or for his womanising. Best became good copy for all the wrong reasons.

It has rarely been spoken of, but if Best was being driven to distraction because he was no longer in love with playing for United, would a transfer have solved some of his problems? Certainly United would have been able to cash-in on their prize asset and there would have been no shortage of buyers. The demon drink may still have been a problem, but perhaps a disciplinarian manager or a move to a club where he was among equals might have been more beneficial. It was not a move that any United manager would have relished for the public fall-out in Manchester would have been unbearable, but United ended up losing Best and getting nothing back.

It was in 1972-73 that it all came to a head, resulting in Best fleeing to Spain. On his 26th birthday, he announced his retirement from football, just a few months after United had said he would not play for them again. There was Best, dressed in reach attire, surrounded by his now familiar side-dishes of women and drink saying farewell to the sport that had made his name. At 26.

The question was, what would Best do now given that his only real talent was to play football. Retirement at 26 offered the potential of too much time at the bar.

So that’s really the end of the story, but Best became a sort of fairground sideshow where he would play for whoever was willing to meet his demands: Dunstable, Stockport, Cork Celtic – you name it, he would arrive in a blaze of publicity, bring in the crowds for a short spell, miss training and then he would be gone. The United States provided a haven for a while, but the script was, by now, becoming very predictable and quite boring.

The last flicker of the light was in 1976 when he was signed by Fulham. There, alongside Rodney Marsh, he showed some glimpses of the old magic before disappearing in 1977-78. He also played for Hibernian in Scotland. Basically, the Best name was still a currency – and some people would take advantage of that, but the relationship with his employer never lasted too long.

It is hard not to feel sad about the Best story, but there is too much self-justification, too little accountability. The truth be known, Best appears an unremarkable character away from the football pitch, but then so often an artist can only express himself on canvas. Best’s contemporaries always talk of him as a thoroughly nice guy, and there’s something very endearing about him, but doesn’t that just make this story all the more infuriating?

I’m glad I saw George Best in action, but I am equally glad I never met him in the pub.