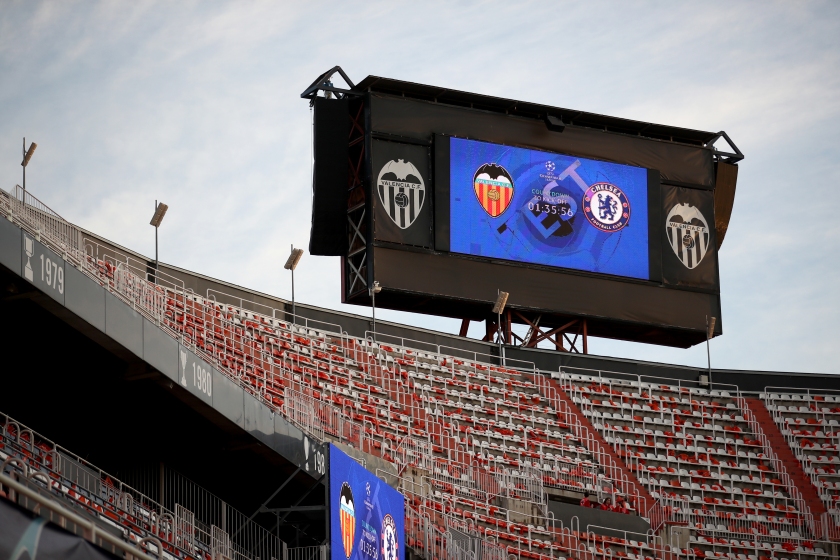 OVER the past couple of months, I have witnessed football in all four divisions in England and hopped across to Spain to catch a Champions League tie involving Chelsea and Valencia. As well as the contrast in climate – it was great to go short-sleeved in Valencia while everyone was rain-sodden at home – seeing football across all levels was a reminder that for all the glitz and glamour of the elite, some aspects of the game remain humble and earnest. Some are in a precarious state.

On the subject of precarious, I must admit I have never felt so vulnerable at a football ground as I was in Valencia. Not because of the fans, but after the ascent of the north face of the Mestalla. Is there a steeper, more daunting climb than the one you encounter reaching the very top of the open stand? We were in the highest but one row, a floodlight behind us and the city before us. Fantastic, but I looked around and asked my pal, “Bill, have you noticed something?…we are the only people over the age of 21 in this part of the stand.” Indeed we were, for the older folk were perched down below. We had reached the summit and after some puffing and panting – not to mention negotiating the concrete steps which are a challenge for anyone under six foot – we were enjoying the view. No surprise the lift to this section of the ground had a long queue.

The Mestalla was a wonderful experience, the vibe was pure passion and the game was excellent, a 2-2 draw amid the shabby chic of one of Spain’s most iconic stadiums. We had to admit, though, it is an arena best suited to Sherpas and mountain dwelling creatures.

Valencia, along with my trip last year to Real Madrid, has given me a taste for Spain after years of relative neglect on my part, mostly because of a few trips to Lloret de Mar as a teenager in search of thrills and spills. Not being a sun-worshipper, my wife and I tend to patronise the Nordic region, partly because as a 50% Dane, I am naturally interested, but also because we cannot tolerate intense heat. However, after years of trolling around central Europe, Germany and Scandinavia, I have suddenly got an urge to visit Spain again.

What’s not to like, especially in winter? There was little obvious evidence of the economic crisis that brought the country to its knees a decade ago, although Valencia’s new ground has sat unfinished like a hotel at a suddenly unfashionable tourist resort. The city itself looks fairly prosperous at first glance with a relaxed air and a taste for modern architecture. The weather is glorious, the oranges that provide the world’s marmalade lovers with fruit glisten in the sun and Iberico ham hangs from the ceilings of countless shops, bars and restaurants. It’s not just about football!

By contrast, my trip to Crewe came just 48 hours after the latest general election in the UK. Anyone who has travelled the country in search of football kicks has changed at Crewe at some point in their lives. Valencia’s fans, supporting a club from one of Spain’s biggest cities, are passionate, but to attach yourself a club like Crewe takes a very special fan. In the UK, we’ve got millions of people who follow the less celebrated, less successful clubs, and the fortunes of their favourite team mean as much to them as any regular at the Mestalla.

From a footballing perspective, Crewe Alexandra is one of those romantic names that once proliferated lower league football, evoking images of flat caps, rattles and cups of Bovril. The beanie hat has succeeded the flat cap, despite a renaissance in natty tweed headgear by order of the Peaky Blinders, and rattles are nowhere to be seen, but Bovril is still on sale at Gresty Road.

I was in Crewe for a couple of reasons, one was to pick-up on the mood after the election, the other was to see a club that I’ve always had a soft spot for. I was fortunate to be seated with a number of similarly-aged Crewe fans who were intrigued why somebody with a southern accent was at the game. We had a good, through-the-game conversation that left me in no doubt about how the locals feel about their club – as well as their politics!

What do fans of clubs like Crewe really hope for? Success has to be relative when you’re as small and challenged as a Crewe, a Macclesfield or a Stevenage. Little victories, fleeting triumphs and, in the current climate where the rich clubs keep getting richer and the poor long to just get through the season, survival is the thing. Crewe have Manchester, Liverpool, Birmingham not so far away, which makes life a little difficult at times. Valencia, despite their good gates and high level of expectation, have to contend with Real Madrid and Barcelona in the same stable. Who really has the hardest task, Crewe or Valencia?

I enjoyed both trips immensely, one for its scale, emotion and quality, the other for the stoic way clubs like Crewe co-exist with giant clubs whose financial clout is way off into the stratosphere. But the experience demonstrated why we love football, because it is about the giants and the minnows, the rich and poor, the bold and the humble. In some ways, those that follow clubs that only briefly get a glimpse of the spotlight are those that represent the heart and soul of football.

Constant success can soon become a  little bit “everyday” – why else would fans of some of recently-monied clubs hanker for the days when success was something they strived for rather than expected? It may be something to do with authenticity. Given that we supposedly live in a time when people, tired and disillusioned by the superficial, crave an authentic experience, a trip to Valencia or Crewe provide the ideal antidote to 21st century world-weariness.