THE BRITISH public has reacted like lemmings hurtling over a cliff top in bulk-buying toilet tissue from supermarkets over the past week or two. The shelves are empty in Waitrose, Sainsbury’s, Tesco and Aldi, gangs of shoppers are going from store to store in search of toilet rolls, but they search in vain, for the short-sighted and the opportunists are descending like locusts, creating a self-fulfilling prophecy.

There was a time when toilet rolls were plentiful and they formed part of every football matchday in the country. Look at any TV scene from the 1970s and 1980s and you’ll see toilet rolls being flung down terraces in response to a goal being scored. 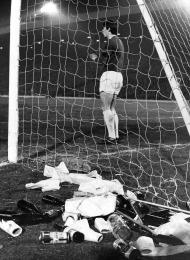 It was a crude way to create ticker-tape celebrations, but it made a mess of grounds and didn’t look especially pleasant. Today, no trophy presentation is complete without gold or silver confetti being sprayed out of machines to create that tacky, “aren’t we having a great time?” scene. For some reason, and it’s probably a fair bet it originated in the US, we do not feel we can enjoy an occasion without a superficial display of excess. The gold foil litter is effectively the false eyelash of trophy ceremonies – tacky and unnecessary.

In 1978, the world was enthralled by the scenes at the Argentina-hosted World Cup. Every game featuring the home nation began with scraps of paper flying in the air to welcome the team. When Ardiles and Villa were signed by Tottenham, the first few home games at White Hart Lane tried to replicate a Buenos Aires matchday, but it failed to catch on.

With the eradication of terracing, toilet rolls seemed to disappear from our football grounds. They may have been a nuisance, but they were harmless. The sight of a roll of extra-soft Andrex at a game in 2020 would undoubtedly provoke a fight among fans.

Why are people panic-buying? It is a curious concept that toilet rolls should be the object of the bunker mentality that is sweeping the nation. Food, clearly, must be a priority and it should be remembered that without food, the need for so many toilet rolls is removed. It’s all about control. The Coronavirus cannot be controlled by people, so they tell themselves they are prepared by stocking-up – on toilet tissue. Whatever happened to “keep calm and carry on”?