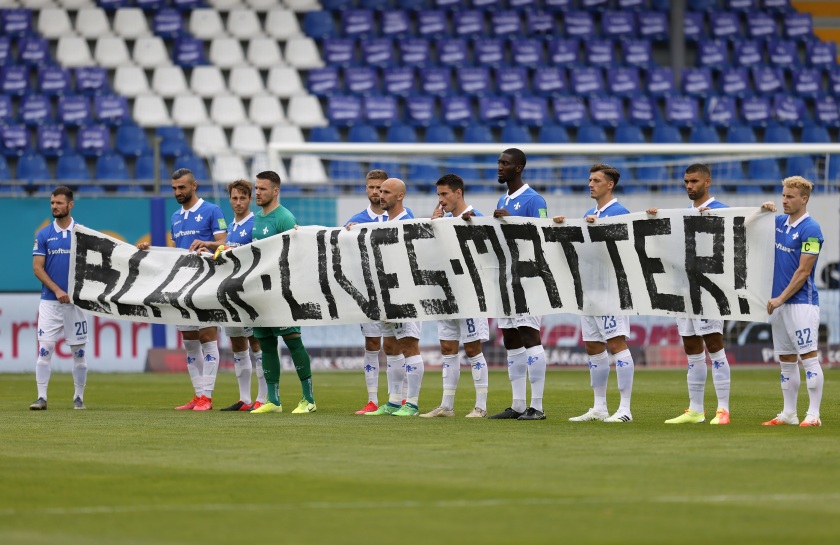 FOOTBALL has always been full of hypocrisy, from self-appointed socialists living in gated communities and driving marque vehicles to clubs trying to position themselves as representatives of a surreal people’s republic that charges its members astronomical sums to be a part of the tribe. And they are quick to show they are embracing the latest cause, be it one driven by social media, an opportunity to share a minute’s silence or applause, or wear hero-making t-shirts. Just how genuine it all is can be debated for hours, but football cannot resist a passing bandwagon.

Black lives matter – they certainly do, and no right-minded person should disagree with that sentiment. We all look in horror at the events taking place in the US – an all too frequent outbreak that has punctuated the nation’s history since the 1960s – but we should also examine our own society and realise we also have big problems of a similar nature. We do not appear to have learned an awful lot from the past.

Jonathan Liew of The Guardian  is a shade cynical when referring to the decision by the Premier League to place the slogan Black Lives Matter  across the back of every football shirt when the action resumes: “It hasn’t formally been decided whether black lives will matter beyond next week”. He adds that this is a “laughingly piffling gesture – a bit of fabric stitched to another bit of fabric”.

Ian Wright, speaking on the BBC website, said the Premier League wants to be on the right side of history by launching the shirt initiative. Surely that’s a “going forward” thing? The past is the past, it cannot be erased, no matter how many statues go for an early bath. Surely, we learn from a chronicled past and its accompanying struggles – be they race, gender, sexual orientation – provide inspiration and guidance for the next generation? Barney Ronay, also of The Guardian  wonders if we are witnessing the beginning of the end of history – for Colston read Dickens or Churchill. On the subject of slavery, it is worth reading Afua Hirsch’s book, Brit (ish) where she highlights the lack of teaching about the history of slavery and the appalling and unbelievable treatment of people.

Rod Liddle of The Times, admittedly a journalist who divides opinion, informs us that Black Lives Matter  is an organisation that has at its core the destruction of capitalism. This is rather ironic given everyone, from banks to high street shops and, of course, football clubs, have lent their support to the message. The Premier League is a child of capitalism and globalisation – do they not realise that they owe their existence to this bumbling concept?

Liddle’s colleague, Henry Winter, notes that “it is not enough simply to take a knee, tweet a stance and stage a day of action, a week of hashtags or a month of debate.”

Just how deep is football’s awareness of the real issues and are clubs’ just paying lip service? Arsenal, who have always seemed a reasonable club, tweeted their support of anti-racism, but the sceptics were quick to remind them they failed to support midfielder Mesut Özil when he spoke-out against the treatment of Uighurs in China. RT added the sight of a top Premier club “taking a knee” in a well orchestrated photo opportunity looked like they were trying too hard to do the right thing after past mishaps. Tottenham were incensed by the yobbish scenes in Hoddesdon, Hertfordshire and were quick to distance themselves from the behaviour of people wearing their colours. “They are no fans of ours,” they said. No club is immune from some criticism – the Raheem Sterling incident at Chelsea seemed to include similar characters of a certain demographic. Too often, fans in the vicinity of racists just laugh, look the other way or just shake their heads – these people are intimidating, as they intend to be. But in this age of CCTV and selfies, prosecution should be much easier.

The mud that sticks is football and racism are indelibly linked, even though not all clubs have racists in their crowds. Those involved in the recent demos have invariably been chanting football songs and one group, the Democratic Football Lads Alliance (never trust any group that has ‘democratic’ as its prefix), created a unified mob drawn from various clubs. What they fail to realise is their narrative is largely dismissed because of the way they look, the way they deliver their message and the underlying mood of menace.

Melissa Reddy in The Independent,  pointed out that the racists socially distance themselves from any smidgen of intelligence, adopting a Nazi salute while defending Winston Churchill yet glorifying his role in the defeat of Adolf Hitler. No wonder that John Barnes, whose backheel of a banana provided an iconic image from the game’s racist heritage, says education is the key. “It may be too late for a 40 year-old racist to change, but his son might,” he said.

Barney Ronay reminds us that while the current protests “centre on visible symbols of oppression” we must also consider how football has been happy to be associated with regimes that are misaligned with our own. We need look no further than FIFA and the World Cup – notably Italy, Argentina, Russia and Qatar. These countries, with authoritarian regimes, were all awarded the World Cup. In the case of Qatar, the Kafala system, which exploits migrant workers, has been compared to modern-day slavery. Since being awarded the World Cup, Qatar has introduced laws to diminish the system, but would they have done so under normal circumstances?

It is hard to see beyond the lure of oil money to find something that attracts FIFA to Qatar, but owner suitability questions should also be asked of individuals and companies from Abu Dhabi (UAE Personal Freedom rating 128th), China (126th), Russia (114th) and Saudi Arabia (149th). Furthermore, after their recent social problems, can the United States really claim to be the land of the free and home of the brave?