IT SEEMS amazing that it took until 1985 for Juventus to win their first European Cup. They had gone close prior to that,  losing 1-0 in both 1973 (Ajax) and 1983 (Hamburg), but they invariably under-achieved in the competition. Sadly, the achievement was overshadowed by the death of 39 Juventus fans in Brussels, caused by crowd violence involving Liverpool supporters. The match became almost incidental but in the aftermath, English clubs were banned from Europe until 1990.

At home in Italy, Juventus were the team of the 1970s through to the early 80s. After Giovanni Trapattoni was appointed manager in 1976, they won five Serie A titles and two Coppa Italias. Furthermore, they had won the UEFA Cup in 1977 and European Cup-Winners’ Cup in 1984. From 1970, Juventus had won eight league titles versus two for Inter and one for AC Milan.

Juventus were a mature, star-studded team in 1984. Michel Platini, France’s captain, scored 20 goals in 28 games as Juve won the 1983-84 scudetto. Platini had joined the club in 1982 from Saint-Etienne and went on to win the Ballon d’Or in 1983 and 1984. To cap a great year, Platini also captained France to the European Championship, scoring no less than nine goals in five games, including two hat-tricks.

Juventus had won Serie A by a two-point margin in 1984, just edging out reigning champions Roma. They clinched the title on May 6, drawing 1-1 with Avellino in Turin’s Stadio Communale. Paulo Rossi, the hero of Italy’s 1982 World Cup triumph, scored the last of his 13 league goals to give Juve the lead.

Six members of the victorious 1982 Azzurri side came from Juve: Dino Zoff, Gatano Scirea, Claudio Gentile, Antonio Cabrini Marco Tardelli and Rossi. All were part of the team that won the title in 1984, with Libya-born Gentile moving to Fiorentina in the summer of 1984. Trapattoni signed Avellino’s Luciano Favero as Gentile’s replacement. A powerful and versatile player, he slotted in nicely with the other mainstays of the Juve defence, Scirea and Cabrini, but never won a cap for Italy.

The Juve side was largely Italian, the only foreigners were Platini, Zbigniew Boniek (Poland) and Massimo Bonini (San Marino). Coach Trapattoni was an old campaigner when it came to European club competition – he was part of the AC Milan teams that won the European Cup in 1963 and 1969 and he had also coached the Rossoneri to the UEFA Cup in final in 1974.

The 1984-85 Italian domestic season had added spice in that Diego Maradona arrived at Napoli after leaving Barcelona. The expectation was enormous and created great excitement right across Italy. In addition, unfancied Verona went on to win their one and only scudetto. Verona beat Juventus early in the season 2-0 and it was clear that 1984-85 would be a tougher campaign for the champions. By Christmas, Juve were seven points behind Verona and were languishing in seventh place. 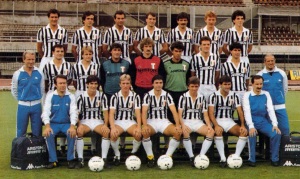 Away from the domestic front, Juve were already in the last eight of the European Cup, having beaten Finland’s Ilves (6-1 on aggregate) and Grasshopper Zurich (6-2) in the first two rounds. Liverpool, the holders, had squeezed past Benfica in the second round after easily disposing of Lech Poznań. The rest of the last eight looked quite weak compared to Liverpool and Juve, who had to face Austria Wien and Sparta Prague respectively in the quarter-finals.

In Turin, Juventus easily beat Sparta 3-0 with Tardelli, Rossi and Massimo Briaschi scoring the goals. Although they lost 1-0 in Prague, going down to a late penalty, they were never in danger of going out of the competition. Their opponents in the semi-final were Bordeaux, who were also beaten 3-0 in the first leg (Boniek, Briaschi and Platini scoring). The second meeting was tense and the French side won 2-0 leaving Juventus hanging on for dear life in the closing minutes.

Liverpool got past Austria Wien and Panathinaikos in the quarters and semis, but they had lost their league championship crown to neighbours Everton, who finished 13 points in front of the Reds. For both clubs, winning the European Cup was the only way they were going to return to the competition in 1985-86. Juve’s team of 1985 may not have secured another chance to win it – the average age of the side was almost 29 years.

The events before the game, with fans dying in the Heysel Stadium, should probably have forced an abandonment. It was something of a surprise that the final went ahead, but it has passed into history as the Heysel disaster rather than a game between two of the world’s top football teams.

The game was decided by a penalty in the 56th minute. Boniek was brought down by Gary Gillespie on the edge of the area, some say it was outside the danger zone, but Swiss referee Andre Daina, gave the penalty. Platini beat Bruce Grobbelaar from the spot and then celebrated before realising his mistake.

Juventus were awarded the trophy in the dressing rooms but then went on a lap of honour, which seemed a little inappropriate in the circumstances. For Liverpool manager Joe Fagan, it was a dreadful finale to his career. Earlier in the day he had announced his retirement: “There was a game of football in the end, but I don’t think anyone’s heart was in it. Mine certainly wasn’t. Football is a game, but not any longer to some. It was UEFA’s decision that we should play, not ours. What a sad way for me to end.”

Many Juventus fans urged their players not to play the game, but they celebrated, albeit reservedly, when their experienced team took the European Cup to Turin for the first time. The final proved to be Paulo Rossi’s last game for Juventus as he joined AC Milan after a poor season in which he managed just three Serie A goals. Boniek and Tardelli also left the club, for Roma and Inter respectively. Trapattoni’s next big foreign signing was Denmark’s Michael Laudrup, who helped Juve recapture the title in 1986.

The football year 1985 was a grim one. Heysel came just a few weeks after the fire at Valley Parade and hooliganism had reared its ugly head several times in the 1984-85 season. It was the beginning of the end of football’s old order, accelerated four years later by the Hillsborough disaster. Juventus were European champions, but the dark shadow of 39 dead supporters has always denied them the chance to really celebrate the achievement.