NATION capitals are very often not the seat of power in football – London, for example, has enjoyed periods of domination, but over the course of the past 50 years, Manchester and Liverpool have been England’s dominant cities as far as the beautiful game is concerned.

Across Europe, a similar tale is told – Germany, Spain, Portugal, France, Italy and Austria, to name but a few, have seen their capitals challenged and usurped by other cities.

Brasília, the capital of Brazil since April 1960, is different to so many other principal cities, chiefly because it was a purpose-built metropolis for administering a somewhat fragmented country. There are no long-established football clubs in the way both Rio de Janeiro and Sao Paulo have the game firmly embedded in their psyche, culture and history.

Today, Brasília has no representatives in the top levels of Brazilian football. It has a notable stadium that hosted games during the 2014 World Cup, but the Estádio Nacional Mané Garrincha remains a somewhat ghostly place that has been used for a number of different events, but rarely major football.

Tattoo conventions and culinary events have been held at the stadium and it is also used as a bus depot by the local authority, but it sits in a barren landscape and has become shabby. The general consensus tells us there is not a strong appetite to bring top football back to Brasília even though like all Brazilian cities, there are thousands and thousands of passionate fans.

The original stadium dated back to 1974 but the rebuild was designed to make a grand statement for the 2014 World Cup and 2016 Olympics. With a total cost of US$ 900 million, three times the envisaged bill, It is the third most expensive stadium ever built. As white elephants go, it’s one of the biggest. State officials have hinted it was a mistake to build such a structure in a city like Brasília and have calculated that it will take 100 years to recoup just 12% of the overall cost. 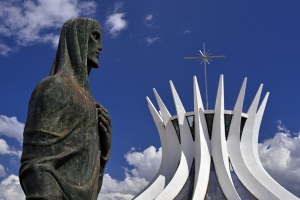 Brasília, of course, is a city renowned for its ambitious and striking architecture. When the city was built in the late 1950s – it took just four years – Brazilian architect Oscar Niemeyer, along with structural engineer Joaquim Cardozo created a number of breathtaking buildings which kick-started the Brazilian modernism movement. Brasília, which was seen at an attempt at creating a utopian city, sat at the heart of the Distrito Federal, a new capital for the nation in an area that was largely undeveloped. In 1960, the population was around 136,000 but today, Brasília has over 2.5 million people. It is regarded as a relatively affluent place, notably around the Plano Pilato, the centre of the city, but elsewhere there are slums and poverty.

In 1960, Brazil was considered one of the homes of the modern game, their national team won the 1958 World Cup and retained it in 1962, and their football was admired the world over.

It takes time to establish a football team, but in a country with legendary names like Flamengo, Corinthians, Santos, Botafogo and Fluminense, all from Rio de Janeiro or São Paulo, it’s not just about creating something attractive, it’s also a lot to do with changing mindsets. The top clubs from Rio and São Paulo have bigger fanbases in Brasília than any local team has ever had. The people moving to the new capital, largely civil servants and construction workers, brought their club allegiances with them.

These cities have dominated a Brazilian football culture that incorporates beaches, favelas and street football. Brasília’s problem is that many have seen it as being “unBrazilian” in that it has lacked the dynamic of the rich living alongside the poor. While this includes extreme suffering and high crime rates, it also cultivates a form of creative tension and aspiration among young people hell-bent on escaping the deprivation through football. But it could be changing as Brasília confronts classic Brazilian problems of inequality, congestion and urban sprawl.

Many footballers have come from poor and deprived neighbourhoods but the Federal District has produced some excellent players, such as Kaká, who was born in Gama, close to Brasília, and Felipe Anderson of West Ham United.

Creating new, local clubs with a credible following has always been difficult, some have been formed by entrepreneurs that have fallen by the wayside. The oldest professional club in the city is Brasília Futebol Clube, founded in June 1975. Playing in a kit that resembles Arsenal’s famous red and white, their home ground is the Estádio Nacional Mané Garrincha, but it is simply too expensive for small clubs to host games there. Although they have won the state league (one of the weakest) eight times, they are not even in the Campeonato Brasilense’s top division.

Brasília played in Série A in 2000 when an expanded league (116 clubs) paid tribute to former FIFA President João Havelange. In 2014, they won the inaugural Copa Verde, a regional competition designed to promote football outside of the main hubs, gaining entry to the Copa Sudamericana.

Legião are another club that are supposed to play their games at the Estádio Nacional. They were founded in 2006. They have played in Série C, albeit very briefly. Real Brasília were formed in 1994 and play out at Vila Planalto. They are simply known as Real Football Club today. Teams like Gama and Brasilense have tried to make play at representing Brasília, but the distance from the city to the club is 30km and 20km respectively.

If there can be any comparison with the struggle to make Brasília a footballing stronghold, it is in the new towns of Britain, where migration of people has been accompanied by their clubs, in other words, in locations like Milton Keynes, Stevenage, Basildon and Harlow, establishing a local club has had to overcome numerous hurdles.

It’s unlikely this will change, the best hope for the unloved national stadium is a commercial development that will circle the structure. It might pay, although it’s not what was envisaged. But if a World Cup cannot inspire a city, what hope is there? The old saying is, “build it and they will come”. That hasn’t really happened, has it?