The decline and fall of the football kit

FOOTBALL shirts are walking advertising billboards: sponsors on the front, advertisers on the back and virtue signalling on the arms. There is no limit to how commercial the humble shirt can become, with clubs issuing three kits a season to maximise the profitability from their supporters. Once, we just wore a scarf to signify our allegiance, but now, the die-hards don the tinderbox fabric to demonstrate their undying loyalty to their club.

Actually, they look dreadful on most supporters, many of whom squeeze into their XXL kit and wear them at all times – at a game, at home, down the pub and even for a night out in town. Admittedly, they solve a “what to wear” problem, but really, football shirts should be for matchday, not a christening, 21st party or barbecue.

Fans used to complain about a club launching more than one kit, but they bought them all the same. Shirt sales, understandably, are now a key part of a club’s revenue stream, but is it really necessary to issue multiple kits every season and in various colourways? Once more, the fans have it in their own hands, but they are desperate not to appear off-message or in any way a traitor to the cause.

Back in the day, you couldn’t get a replica shirt if you tried. Manufacturers such as Bukta, Litesome and Umbro would provide standard blue, red, white, old gold or stripes, but they rarely looked identical to the club kit. Up until the mid-to-late 70s, shirts were cotton, but then the lightweight, man-made fabric came in, all static and sparks and not something you should wear close to a naked flame.

The clothing catalogues, Freeman, Grattan and others, all pictured moustachioed models posing in the latest Litesome offering, perhaps a cheeky gold and black stripe issue or a diagonal band providing a continental touch.

My first football strip was all-white. It was Christmas 1968. My Mum presented me with an all-white outfit, possibly because it was cheaper than blue. And as any self-respecting Chelsea fan will tell you, Leeds were the enemy (in truth, Leeds were on their way to the Football League title). Nevertheless, I made out that the all-white kit was a tribute to Real Madrid (the shirt was later upcycled to resemble an Ajax shirt).

Our football coach, a former pro called Ronnie Fogg, made the most of it. “Here comes Di Stefano,” he joked when he saw me tip-toeing onto the muddy pitch. “He’s afraid he might get his kit dirty.” As we lined up for some dribbling practice, Foggy asked me to step forward. “He’s got a new kit and it’s lovely and white. I’m not going to be popular with his Mum, but sit down.”  I sat down on the muddy grass. “Now grind your bottom into the grass…that’s it, nice and muddy…how do you expect to be a footballer if you’re frightened of the mud?”. I was not happy, in fact, I was downright annoyed, but I have never forgotten that incident.

One of the first pioneers of new-style kits was Manchester City with their red and black striped shirt they wore for the 1969 FA Cup final. Coventry City launched a very innovative green and black version but then ruined their reputation for creativity with a brown Admiral away strip which was really quite awful! 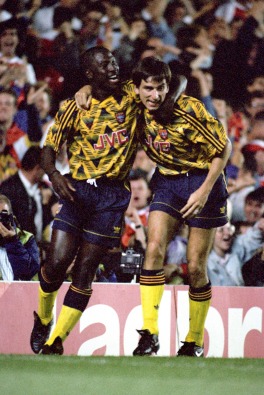 Increasingly, clubs turned to yellow as a second kit: Arsenal, Chelsea, Everton, Leeds, Manchester United and Tottenham to name but a few. But often the yellow wasn’t quite as vivid as we saw in the 1980s. Certainly, Chelsea’s much-coveted away kit, complete with a yellow stripe on the shorts, was more amber than daffodil.

In 1971-72, Manchester United added a new twist to their traditional colours with a white v-collar, a dynamic new look for what they hoped would be a new era. More of this style appeared in the coming years, but United’s looked smartest, especially when teamed with long hair and Stylo boots.

Advertising on shirts was being talked about as early as the 1971, but it was around a decade before it became commonplace. While we scoffed at the continentals for having ads, notably the Belgians, Dutch and French, we soon realised that here was a valuable billboard that could be sold for hard cash. It’s interesting that people now refer to a certain shirt from the past by their sponsors – Sharp, Dulux, Hafnia and Gulf Air, among others. It clearly worked as a brand vehicle.

Today, shirt designers and manufacturers go to the extreme to provide a new product to sell every season. As we have pointed out, the current batch are examples of violent graphic design or accidents in a paint factory. But as someone said in response to our last article on kits, they are not aimed at pleasing the general football public, they are targeted at the fans, who express their support through buying shirts. Blind devotion, I would call it, for at upwards of £ 40 a shot, fans are spending their cash on goods that effectively become obsolete in a season. They may be aimed at a specific market, but in some ways it is exploitation of unconditional love. The clubs have the fans by the short and curlies…if not the shirt tails. What did happen to Litesome?