IN THE the mid-to-late 1960s, Argentine football had acquired a dark image. In 1966, the national team left the field at Wembley, after an ill-tempered World Cup quarter-final, to chants of “animals, animals”, a sentiment that was echoed by prickly England manager Sir Alf Ramsey. A year later, violence erupted in the World Club Championship between Celtic and Racing Club of Buenos Aires, with multiple sending-offs and deplorable behaviour on and off the field. When, in 1968, European champions Manchester United met another team from Argentina, Estudiantes de La Plata, there were understandable fears of a bloodbath. Those fears were not without foundation.

When Estudiantes, a club that dates back to 1905, came to prominence, they broke the stranglehold of the Buenos Aires quintet: Boca Juniors, River Plate, Racing Club, San Lorenzo and Independiente, all of whom had dominated Argentine domestic football. Estudiantes was considered a small club from a city that, between 1952 and 1955, was renamed Eva Peron City.

In 1967, however, Estudiantes won the Campeonato Metropolitano, beating Racing 3-0 in the final. They then finished runners-up in the Campeonato Nacional and qualified for the Copa Libertadores. 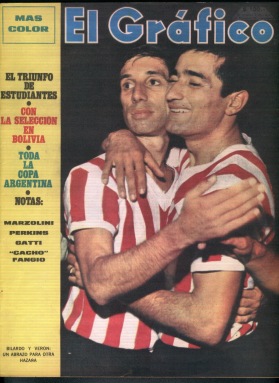 Estudiantes didn’t just win the Argentine title, they unleashed a new style of football that opened up an era of cynicism, gamesmanship and ill-discipline. The instigator was coach Osvaldo Zubeldia, a former player with, among others, Velez Sarsfield and Boca Juniors. Zubledia compiled dossiers, in much the same way Don Revie did at Leeds, of teams, their tactics and what made them tick. He set out to stop the opposition at all costs. Unsurprisingly, this was best executed by younger, more impressionable players. The Estudiantes side that won the Argentine league in 1967 and then the Copa Libertadores for three consecutive years was built around the club’s successful under-19 team. They were called, “a tercera que mata,” which translated, rather ominously, to “the killer juveniles”.

They set out to put the opposition off their game and even went as far as pricking players with needles as they went into a tackle.

After topping the domestic league, Estudiantes won the Copa Libertadores, beating Brazil’s Palmeiras in the final after disposing of two of the giants of the Argentine game, Independiente and Racing. The competition saw the emergence of Juan Ramon Veron, a richly skilful player renowned for his technique and aggression. Veron was nicknamed “La Bruja” – the witch, and when Estudiantes met Manchester United for the World Club Championship, this name was used as part of the demonising process that took place in the media.

Not everyone was anti-Estudiantes, however. The magazine, El Grafico described Zubledia’s team as “Young, strong disciplined, vigorous, spiritual and upright” and suggested they were a great example to the nation’s youth.

Anyone present at the two games with Manchester United would not endorse that view. Estudiantes won the first leg 1-0 in Buenos Aires, aided by a catalogue of fouls and provocative tactics. Nobby Stiles, who had been targeted by the Argentine press in much the way some of Estudiantes players were in the return, was sent off. “We should never go there again,” said George Best, after being subjected to an evening of ill-treatment.

The second leg was no better. Veron scored an early goal to extend the aggregate and United were kicked, tripped and punched for the entire 90 minutes. Best was sent off near the end after a foul too far and although Willie Morgan equalised in the dying seconds, Estudiantes won with the sound of jeering in their ears. The British press was incensed, with the Times describing them as, “One of the most despicable teams ever to emerge from South America.”

Estudiantes regained their Copa Libertadores title in 1969, beating Uruguay’s Nacional 3-0 on aggregate in the final. They met Milan in the World Club Championship and it was here that the tide of popular opinion turned heavily against the club. They were brushed aside 3-0 by Milan in the San Siro stadium in the first leg, with one of the goals scored by Nestor Combin, an Argentine. In the second leg, all hell broke loose. Estudiantes won 2-1, but a number of Italian players were assaulted and Combin was arrested after the game for “draft-dodging” as he lay bleeding and broken following an assault on the pitch. Goalkeeper Alberto Pelotti, who had kicked Combin and punched Gianni Rivera of Milan before fighting with fans, was subsequently imprisoned for a short time (a tough regime, Argentina), along with Ramon Aguirre Suarez and Eduardo Manera.

Argentina, who were bidding for the 1978 World Cup, tried to distance themselves from the behaviour of the Estudiantes team. Suddenly, people were accusing Zubeldia’s team of playing “el antifutbol”. Although players like Suarez and Luis Medina had reputations for being violent on the pitch, Estudiantes also had cultured players like Carlos Bilardo, who would later coach Argentina to World Cup glory in 1986, and Raul Medina.

The negative publicity didn’t stop them from winning a third Copa Libertadores in 1970, overcoming another Uruguayan side, Penoral, 1-0 over two legs. But a year later, when their run of triumph ended in the final against Nacional, the team started to split up. They have won it only once – 2009 – since that glorious, and infamous, period. Ironically, in their line-up in 2009 was Juan Sebastian Veron, the son of Juan Ramon Veron. They were coached by Alejandro Sabella, who led the national team to the World Cup final in 2014.

Estudiantes is a name that refuses to be forgotten. They left their mark on world football during the club’s most successful period. But amid the brutality, they did have some fine players. Sadly, they will probably be remembered for the wrong reasons.