IN the days when any team from behind Communist Europe was treated with a great sense of curiosity, any player resembling a larger-than-life figure contradicted all preconceived ideas about football in countries such as Bulgaria, Czechoslavakia and Romania.

Eastern European Communists were meant to be dour and mechanical and prioritised function over artistry. That was the myth, for amid well-drilled and super-fit teams, there were some genuine characters.

Ricâ Râducanu, or Necula, as he was also known, was one such player, a 6 feet 3 inch goalkeeper who entertained and fascinated football crowds within Romania as well as outside his own nation. Tall, angular, hawk-nosed, often dressed in a black and frequently noisy, he stood out among his Rapid Bucharest team-mates. 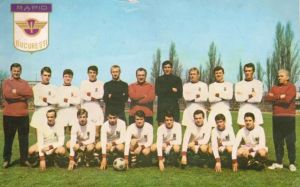 He was, apparently, something of a playboy figure who enjoyed a night or two out on the town. His flamboyant style of dress got him noticed, but he was also outspoken and always keen to be the centre of attention.

Born on May 10 1946, just as the fascist regime that ruled Romania between 1940 and 1944 was brought to justice, Râducanu grew up in Vlâdeni in Ialomita county, a small village where everyone worked in the agricultural industry.

Râducanu was a foreman on the state railway and Rapid Bucharest were the team of the railway workers. He was 19 when he joined the club in 1965 and within two years, he had won his first international cap for Romania. This was a golden period for Rapid and in 1966-67 they won the Romanian league championship and Râducanu was a pivotal figure as his team conceded 21 goals in 26 games.

Râducanu was often brilliant, but he was also prone to making errors that would cost Rapid or Romania. He considered himself to be braver than most goalkeepers, especially those in England. “English goalkeepers don’t come off their line, they have no courage. Me, I’m not afraid to go out looking for the ball,” he said in 1971. Such an adventurous spirit would sometimes be his downfall, either by getting caught off his line, or through straying too far from his penalty area. The bizarre could happen with Ricâ, such as in 1978 when he turned away from a cross he felt was sailing wide but it struck him on his back and stayed in play, falling for an opponent to score. 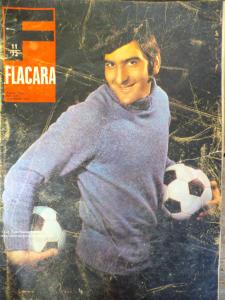 Nevertheless, Râducanu was selected for the 1970 World Cup after helping Romania qualify from a tough group that included 1966 semi-finalists Portugal. But despite playing most of their group games, he managed only 72 minutes in Mexico. Why? He was due to line-up in Romania’s opening game against England, but was suspended after breaking the team’s curfew, preferring to enjoy a night on the town in Guadalajara. The Romanian national team coach, Angele Niculescu, was livid with his goalkeeper and told the media: “Râducanu has been taken from the list of the team nucleus for disobedience,” he said.

Râducanu was deprived the chance to play against his hero, Gordon Banks. He had already made his mark with England’s players earlier in his career. Jack Charlton, for example, described him as “the most remarkable goalkeeper in the world” and added he was “a kind of Len Shackleton (another flamboyant figure) between the sticks.” He could be over-emotional, too, as witnessed when he threw the ball into his own net after accusing his Steaua team-mates of lack of effort.

But his only appearance in the World Cup came in the 27th minute of the third group game against eventual champions Brazil. Stere Adamache, who started the game in goal, had conceded twice, once from Pelé and Râducanu became the first goalkeeper substitute in World Cup history. Romania lost 3-2 and went out of the competition.

In 1971, Râducanu and Rapid were drawn against Tottenham Hotspur in the UEFA Cup. He captained the team and was generally the first person the British media turned to in the build-up to the first leg at White Hart Lane. “I have a big voice, I shout like a madman,” he said when questioned about the suitability of a goalkeeper as skipper.

The game provided an opportunity for Râducanu to entertain the crowd. But not everyone appreciated his antics. “An astonishing exhibition of clowning casualness,” said one UK newspaper.

Tottenham won 3-0 but Râducanu’s display, trapping shots on the line, catching crosses one-handed, juggling the ball with feet, thigh and chest, was the talking point from the game. Pat Jennings, the Spurs keeper, commented: “He’s a good goalie but insists on taking the complicated way out of trouble…it was worth the entrance money just to see him, but he wouldn’t try that sort of clowning in the Football League. I don’t know how he got away with it.”

He didn’t really and was caught napping when Spurs’ netted their first goal by Martin Peters after just 20 seconds. And when Martin Chivers made it 2-0, Râducanu protested and created a scene that held the game up.

Spurs were as good as through but had to negotiate the second leg in Bucharest. Bill Nicholson described the game as the dirtiest he had been involved in as manager. Spurs won 2-0 but Râducanu landed himself in hot water when he threw the ball at the referee’s back after the second goal. He didn’t receive any punishment for his act of belligerence.

Râducanu won the Romanian Cup in 1972 when Rapid beat Jiul Petrosani in the final 2-0 in Bucharest’s 23 August stadium. This was the last major honour of his club career, although he went on to win 61 caps for Romania. He never got to appear again at a major tournament.

He left Rapid in 1975, playing for Sportul Studentesc (nicknamed the crazy gang) and then briefly for Steaua before hopping across a number of clubs until the end of his playing days in 1982. It should be noted he scored seven goals in the Romanian league for Rapid.

At the time, the appearance of Râducanu left journalists and fans expressing their surprise that a player from the old eastern bloc had such a personality: “The complete opposite of all you expect from an Iron Curtain footballer,” said one scribe. He was indeed, Necula Râducanu was a one-off.