WEEK-BY-WEEK, people are getting increasingly excited about Napoli and their goalscoring antics, and little wonder, for they have opened up an eight-point lead at the top of Serie A and they also walked through their Champions League group, scoring goals for fun. For the first time in years, a club that hasn’t won Serie A since the days of Diego Maradona is being talked of as realistic scudetto winners. This could certainly be their time for Juventus are struggling by their own standards and Inter and AC Milan are not quite clicking as they should. If nothing else, Napoli look the most exciting team in Europe, but they could also be the most functional at this precise moment.

The club’s owner, Aurelio De Laurentiis, believes the current team is the best he has seen in his time in charge. He was actually criticised for selling players like Kalidou Koulibaly (€ 40 million to Chelsea), David Ospina, Dries Mertens and Lorenzo Insigne in the summer, all of whom were in their 30s and Fabián Ruiz was sold to Paris Saint-Germain for € 25 million. Simultaneously, they also acquired some very promising talent, notably Georgian forward Khvicha Kvaratskhelia, who has caught the attention of every major club in Europe after his first few months at Napoli.

The pundits claim Kvaratskhelia is the most exciting player to arrive in Serie A since Cristiano Ronaldo joined Juventus in 2018, and they might be right. Napoli fans were hoping that Pablo Dybala was heading to the club from Juve, but he opted to join Roma, but Kvaradona, as he is affectionately known, has made them forget their disappointment. In the summer, sports director Cristiano Giuntoli got busy and nine players were brought in, either on permanent deals or via loan arrangements.

The response from some of the new boys has largely been impressive, with Luciano Spalletti’s side playing crisp, attacking football. The way they dismantled Liverpool in the Champions League raised many eyebrows, but they also scored prolifically against Ajax and Rangers in the group stage. They now face Eintracht Frankfurt in the round of 16, a tie they can look forward to with some degree of confidence.

Napoli have also benefitted from the form of the powerful Victor Osimhen, who has scored nine Serie A goals in 11 games, including a hat-trick against Sassuolo. The club’s biggest problem may be working out how to keep the Nigerian striker when the transfer window opens.

Napoli also have some strength in depth up front in the form of Giacomo Raspadori and Giovanni Simeone, while the fresh impetus at the club seems to have been the catalyst for the rejuvenation of players like midfielder Stanislav Lobotka. Huge South Korean defender Kim Min-jae, who was signed from Fenerbahce for € 18 million, and Juan Jesus, who joined on a permanent basis from Roma after a loan period, have also been starring in defence.

Spalletti, who is from Tuscany, is a curious character, driving around Napoli in a modest Fiat Panda rather than a conspicuous statement on wheels. After leaving Inter, he spent two years on his farm, concentrating on olive oil and wine production. In addition, his self-imposed sabbatical gave him the chance to reassess his approach to the game. He’s never been short of would-be employers and has coached eight Italian clubs, including Roma, Inter and Napoli, and also spent four and a half years with Russia’s Zenit St. Petersburg.

Napoli have gone close to winning Serie A over the past decade, but lacked the staying power to keep up with Juventus and also lost their nerve when they were leading the pack. The summer clear-out was arguably a big positive for the club as it enabled them to create something of a blank canvas to mount a title challenge in 2022-23. The opportunity is real as the big northern clubs are not at their strongest while Napoli appear to have bought very well in the close season. It will be 33 years since their last scudetto, so the big prize is long overdue, and don’t rule out a prolonged Champions League campaign.

NAPLES provokes great debate. At first glance, it is dirty, unruly, scary and ugly. It is a sprawl, Italy’s most densely populated urban area, overlooked by Vesuvius, Europe’s most dangerous mainland active volcano. A 30 minute walk around Naples may bring you to the conclusion that this city of 3.5 million people is dancing, both literally and metaphorically, on a volcano.

Poverty runs through Naples like a fast-flowing river, from the bongo-thumping begging-buskers to the litter-strewn side streets where washing hangs from rusting balconies and window boxes. It is hard to believe that a city such as Naples should be part of the same country as Milan and Rome. While Milan has its black-clad fashionistas that stalk the grand shopping arcades, Napoli is a city of the street, characterised by tight alley-like thoroughfares like the scooter run of Via Tribunale where all life can be found. 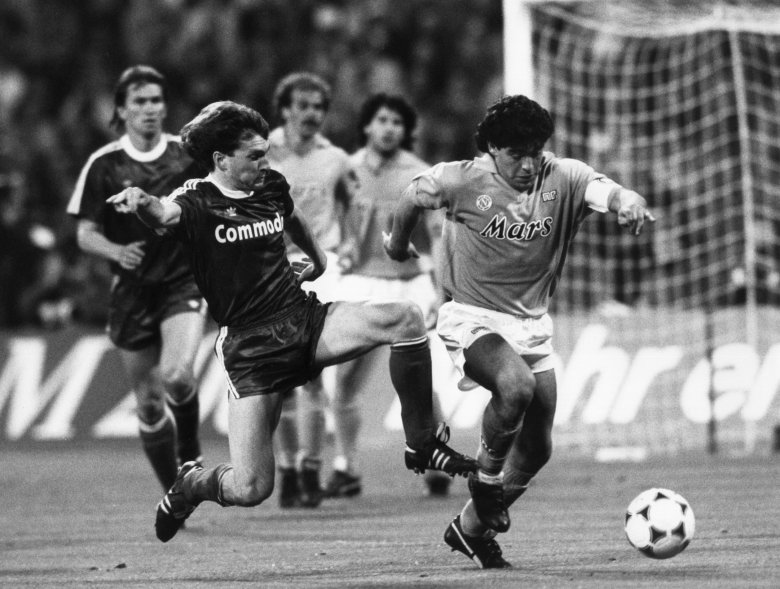 It’s a one-football club city, is Naples. You are warned not to display allegiance to any other club, especially AC Milan, Inter, Juventus and Roma. You can buy Napoli souvenirs everywhere, some official but mostly cheaper copies. Whether you spend one euro or 10, the message is the same: “Forza Napoli”. There’s no other football narrative.

Napoli have been one of the most consistent teams in Serie A in recent years, but they still have some way to go to match their golden period between 1986 and 1990 when Napoli won two Serie A titles and played in front of 70,000 people at every San Paolo home game. Today, the club’s average gate is 33,000 – somewhat down on the glory years. 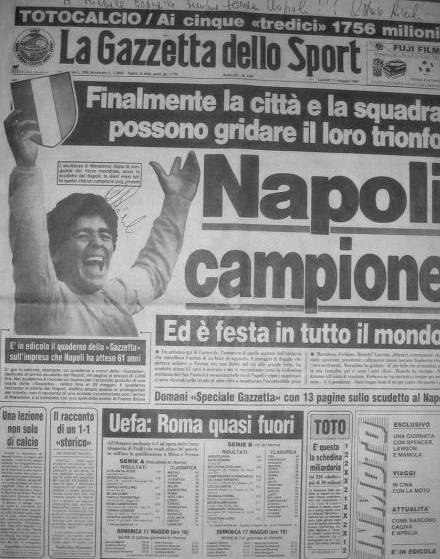 In that period, 1984-1991, this deeply religious city – every cab is adorned with a rosary – found a  new idol to rival the man upstairs, a squat Argentinian by the name of Diego Armando Maradona, the most revered number 10 since Pele and the perpetrator of the most memorable hand action since Michelangelo’s image of god reached out to give life to Adam, as recorded in the Sistine Chapel in Rome.

Maradona arrived in Naples in 1984, a refugee from a mostly uncomfortable spell in Barcelona. He joined the Catalan club in 1982 following a disappointing World Cup debut in Spain, which culminated in Argentina losing their crown and the young Maradona being sent off. His time with Barcelona, albeit under compatriot Cesar Luis Menotti, was hampered by injury, illness and ongoing disagreements with Barcelona officials. In hindsight, Maradona and Barcelona was a bad match, a mighty club unprepared to allow an individual appear larger than the institution.

Maradona, at both a club and international level, needed to be the king-pin in order to truly flourish. Certainly, once he transferred to Napoli, a surprise move for a player who was supposed to be developing into the very best in the world, he enjoyed unprecedented success. For Napoli, the arrival of Maradona was seen as the catalyst to tranform an under-achieving club into the top bracket in Italy. It was a celestial marriage and the impoverished of Naples embraced Maradona as if he were one of their own. Naples, looked down upon as a “city of thieves”, suddenly had the best player in the world, and Maradona had the stage on which to be worshipped. If he was in search of love, he would find it in Southern Italy,

Why the perfect union?  Maradona grew up in a poor district of Buenos Aires, a city with distinct Italian influences. Naples could well slot into anyone’s idea of a Latin American metropolis, its architecture reflecting a Spanish past. Neapolitan tour guides proudly declare that Naples is a city that flies in the face of the institutions created by man, an accusation that can easily be aimed at Maradona.

Even today, it is the infamous Spanish quarters in Naples where Maradona’s exploits are so vividly recorded. When I enquired about personal safety in this neighbourhood, I was advised by locals to avoid it at all costs. There are murals, shrines and graffiti celebrating Maradona in these streets, some 25 years after his heyday. There are also bullet holes in some of the frescoes, fired there by local criminals. 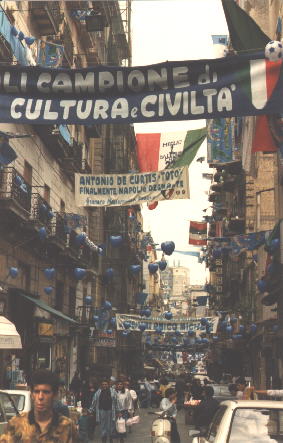 It’s no surprise that he should still be adored, for in 1987, Maradona inspired a Napoli side that included names like Giordano, Carnevale, De Napoli, Ferrara and Bagni, to the club’s first Scudetto. It sparked off celebrations that are still talked about today. Naples cavorted for a week and gloated that they had finished ahead of Milan, Inter and Juventus. They also won the Coppa Italia in 1987.

They should have repeated the trick in 1988. Strengthened by the arrival of Brazilian Careca, Napoli were top until the last few games when they strangely – and controversially – lost form. Maradona topped the Serie A scoring list and took no blame for his team’s collapse, allowing Milan to win the title. In 1989, Napoli won their first European prize when they lifted the UEFA Cup. And in 1990, Maradona – who was now talking of moving to Marseille – led Napoli to a second Scudetto. But cracks were developing and during the 1990 World Cup, Maradona attempted to “divide and conquer” by urging Southern Italy to support his Argentina in the semi-final against Italy. It was a mistake that threatened to sour even his relationship with the Napoli faithful. By 1991, the dream was over. Maradona, now making headlines for the wrong reasons, left the club under a cloud and moved to Sevilla. Napoli’s moment in the sun was over.

But he’s still good box office in Naples. You will always come across Diego Maradona memorabilia. T-shirts by the dozen, cardboard cut-outs, fridge magnets, posters, figurines and scarves. He’s almost as ubiquitous as Garibaldi, Victor Emmanuel, Pompeii and Vesuvius. And mention Calcio and Napoli and almost certainly, the third word will be “Maradona”. You don’t have to like him, especially if you’re English and remember Mexico 1986, but you cannot deny he gave Napoli the best of times. And for that, the San Paulo tifosi will be eternally grateful.