IF YOU’VE watched the film, The Damned United, you don’t necessarily come away with a positive view of Leeds United under Don Revie or the two legends in Leeds’ midfield in the mid-1960s to early 1970s, Billy Bremner and Johnny Giles.

Along with Jack Charlton and Norman Hunter, no other players epitomised the stance adopted by Revie and his team in that period. Not for nothing did Leeds have a dressing room motto, “Keep Fighting”.

Giles was a supremely gifted player who could do wonders with the ball. Bremner was tenacious, often letting his fiery temper get the better of him. But there was no better player to rise to the occasion in a big game.

Foul magazine, the forerunner to the fanzine era and in particular, When Saturday Comes, loved nothing more than to snipe at Bremner. Foul was mostly penned by cynical journalists, and in its heyday (1972-1975), English football had become violent, often very defensive and full of “dirty tricks”. In one edition of the publication, Bremner’s disciplinary record was listed – 38 bookings (including two sending-offs) from 1962 to 1974.

John Arlott, a brilliant writer, described Bremner as “10 stone of barbed wire”. But he was also a great on-field skipper, as underlined by his place at the top of a survey to find the Football League’s greatest captain. Not bad for a 5ft 5in player who was rejected by Chelsea and Arsenal for being too small. Ironically, the Stirling-born Bremner enjoyed nothing more than a battle against the two clubs that failed to see his potential.

By the time Giles arrived at Elland Road from Manchester United, seemingly rejected by Matt Busby, Bremner had already played more than 100 games for Leeds. Starting out as a winger, he was converted to a midfielder by Revie, who saw Giles as his ideal partner, especially after similarly combative Bobby Collins was sidelined through injury.

Giles had been a regular at United and won the FA Cup with them in 1963, but he fell out of favour with Busby. He asked for a transfer and was sold for just £ 33,000 to Leeds. “I am going to haunt him,” said Giles upon leaving Old Trafford and to some extent, the loss of Giles did come back to bite United on the backside, especially in their early-to-mid 1970s slump when they were crying out for midfield leadership.

The duo ran the Leeds midfield as Revie’s men upset the established order in the first division. Giles, many years later, told the Yorkshire media: “Billy and I had a natural understanding. It’s something you can’t teach or coach. If I picked up the ball in the centre circle, I knew where he’d be waiting to receive it. He was a joy to play with but easy to play with too. Billy and I hit it off straight away. It was a partnership.”

It was popularly believed that Bremner did Revie’s bidding on the pitch – the executioner of the Don’s OCD preparations – as evidenced by countless photos of intimacy between manager and skipper. But in truth, Giles was the brain in midfield and when Revie finally stepped down to manage England, his first choice as his replacement – and no doubt, keeper of the flame – was Giles.

There’s no doubt that Giles was the more cultured player, although he could also mix-it and call on some of the off-the-ball tricks normally associated with much-derided continental European teams from Italy or Spain. Bremner wore his heart on his sleeve and was easily recognisable as bring a little over-zealous at times. “A dirty little bastard,” said the late Dave Mackay of Tottenham, who was famously pictured grabbing Bremner by the scruff of the neck. A little agricultural he may have been, especially in his raw, younger days, but he was also a match winner. He scored the decisive goals in no less than three FA Cup semi-finals – 1965 (v Manchester United 1-0, 89 mins), 1970 (v Manchester United 1-0, 9 mins) and 1973 (v Wolves 1-0, 70 mins). He also scored in the 1965 FA Cup final for Leeds, although 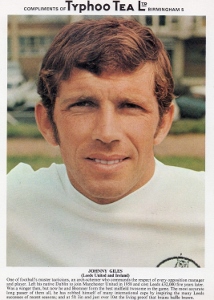 they lost 2-1 to Liverpool. He also captained Scotland in the 1974 World Cup.

Ironically, Bremner and Giles both scored the same number of goals for Leeds (115), but Giles was also renowned for being the arch-creator. Don Revie described him thus: “John was a superlative soccer technician whose ability had no limits. He had great natural aptitude but was always working hard to improve. When we finished a training session he would go off to the gym to work on his own.”

Giles was ignored for the Leeds job on two occasions, once when Revie recommended him and then when the ill-fated Brian Clough era ended. But at the end of 1974-75, and Leeds’ unfortunate defeat in the European Cup final – Giles’ last game for the club – he accepted an offer to be player-manager of West Bromwich Albion. Bremner stayed until September 1976 when he joined Hull City. He would later manage Leeds but sadly, died at the age of just 55.

If you want to see just how good this great partnership was, look no further than a game that took place on March 4, 1972. Leeds destroyed Southampton 7-0 and put on a passing display that would not have looked out of place on the playing fields of Amsterdam or Rotterdam – this was in the age of Total Football with Ajax and Feyenoord in their pomp. And at the heart of it were Bremner and Giles, showboating their skill-set. Tough – yes, competitive – undoubtedly, but two terrific players who rank alongside the best of their era.