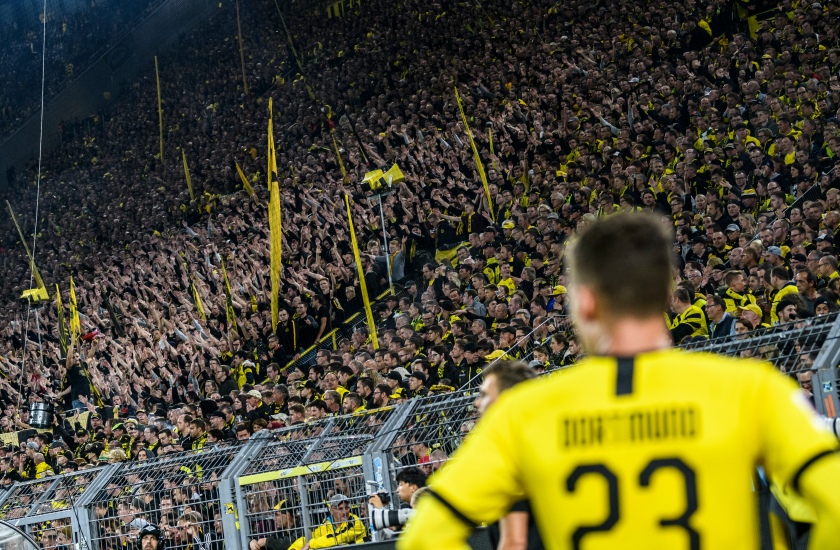 BORUSSIA Dortmund (BVB) may have posted solid revenues for 2018-19, but their net total (excluding transfers) of € 377 million is dwarfed by rivals Bayern Munich’s revenues for the same period of € 750 million. While BVB will be ranked among the top dozen clubs in terms of their revenues, the gap between the Bavarians and the rest of the Bundesliga is underlined once more.

BVB are the world’s best supported club by attendances, with an average of over 80,000 and 55,000 season ticket holders. Their matchday income of just under € 45 million reflects a realistic and supporter-friendly approach to ticket sales. Bayern Munich, for example, generated £ 104 million in 2017-18 from matchdays.

The club currently represents the most consistent challenge to Bayern, who have won seven consecutive Bundesliga titles. The Bavarians’ wage bill is a lot higher than BVB’s – while Dortmund’s wage bill was € 205 million for 2018-19, Bayern’s went above € 300 million. German clubs generally have a low wage to revenue ratio, BVB’s comes in at 54%, Bayern’s 48%. As a benchmark, Barcelona’s ratio is 70%.

BVB’s total revenues for 2018-19 were € 489 million and net of transfers, the € 377 million was some € 60 million above their 2017-18 result. Post-tax profit totalled more than € 17 million which was down on the previous season’s € 31.7 million. BVB income from transfers was down on 2017-18 by around € 100 million. Rivals Bayern have made a habit of snatching talent from Dortmund and other clubs in recent years, including Robert Lewandowski and Mario Götze, a strategy of weakening your chief rivals by using your name and position in the footballing hierarchy to lure the best players.

At the same time, BVB have shown they are good at player trading, turning sizeable profits on players they have bought for relatively small fees – Pierre Emerick Aubameyang was bought for around € 12 million and sold for € 63 million, Ousmane Dembélé arrived for € 15 million and disposed of for more than € 100 million and Christian Pulisic was nurtured at the club but earned BVB € 64 million when he joined Chelsea.

Last season, in Lucien Favre’s first season as coach, BVB went painfully close to ending Bayern’s monopoly on the Bundesliga, finishing two points behind in second place after leading the table as late as the end of March. Dortmund led for 21 weeks but Bayern took over on April 6 after thrashing BVB 5-0 in Munich. BVB lost just four times, the most damaging being the 3-2 home defeat against Schalke at the end of April.

The club is also benefitting from the exclusive marketing of the rights to their stadium, Signal Iduna Park, and has also increased the focus on marketing the BVB brand, a key pillar in their business strategy. Other key elements include the development of young talent and increased fan involvement.

BVB were applauded for using youngsters such as England’s Jadon Sancho, a player they may struggle to keep over the next couple of years. Assistant manager Jorg Heinrich told the UK media the club expects Sancho to become a world-class player and move on. They went into 2019-10 spending € 100 million-plus on new signings, but they received € 60 million in sales. Among the new faces was old favourite Mats Hummels (Bayern), Thorgan Hazard (Gladbach) and Julian Brandt (Leverkusen). According to Statista/Transfermarkt, BVB’s squad is valued at around € 634 million, the second highest in the Bundesliga, but some € 230 behind Bayern.

This season, BVB have lost once in the league and have made a respectable start to the Champions League campaign in what is a tough group comprising Barcelona, Inter Milan and Slavia Prague.

BVB were the first Bundesliga club to be listed on the Frankfurt Stock Exchange and have also broken new ground in being the first football club in Germany to opt for digital reporting of financial results. The club is clearly a forward-looking institution and understands the correlation between on-pitch and financial success, but have they got enough financial clout to end Bayern’s reign?